Palm Beach County will be home to one of the largest and most prestigious youth lacrosse events that takes place in the United States.  The Intercollegiate Women’s Lacrosse Coaches Association (IWLCA) selected The Palm Beaches as the destination for the IWLCA Presidents Cup over the next three years.  The Palm Beach County Sports Commission will partner with the IWLCA and Corrigan Sports Enterprises to host the Presidents Cup at the International Polo Club and Village Park in Wellington starting with the 2019 edition on November 22-24, 2019.

The International Polo Club (IPC), Village Park, and Deeridge Farms in Wellington will provide a remarkable setting for this epic lacrosse event.  The International Polo Club (IPC) is a remarkable venue that maintains 248 acres of beautifully manicured land, consisting of nine (9) polo pitches. The Palm Beach County Sports Commission will layout nearly 40 lacrosse fields over 6 polo pitches.  Village Park is one of Palm Beach County’s premier municipal parks and will provide an additional ten (10) lighted fields for this tournament.  Deer Ridge Farms, which is one of the elite equestrian facilities in The Palm Beaches, will accommodate the parking needs.

In addition to the Presidents Cup, the IWLCA will also bring its Annual Meeting to The Palm Beaches for the next three years.  The 2019 IWLCA Annual Meeting will take place on November 20-22 at the Palm Beach County Convention Center and Hilton West Palm Beach.  The IWLCA Annual Meeting attracts a majority of the college lacrosse coaches from the National Collegiate Athletic Association (NCAA) Division I, II, & III and the National Association of Intercollegiate Athletics (NAIA).  The IWLCA has purposefully combined its Annual Coaches Meeting and Presidents Cup to create a dynamic lacrosse showcase and recruiting environment while ultimately growing the number of college coaches and lacrosse teams that will come together.

The IWLCA Presidents Cup has a storied history in Florida. In 2008, this event relocated to the ESPN Wide World of Sports Complex in Orlando.  In 2011, the IWLCA combined its Annual Meeting with the Presidents Cup.  High school lacrosse players learned they had the opportunity to perform in front of college coaches and team participation rapidly increased.  The event enjoyed a tremendous stay in Orlando over the last 11 years and has transformed into one of the largest amateur sports events taking place annually in the United States.  Both the number of teams competing in the IWLCA Presidents Cup and the number of coaches attending the IWLCA Annual Meeting has grown every year.

Very few communities have the privilege and ability to host a tournament the size of the IWLCA Presidents Cup, which transforms destinations into a lacrosse mecca.  In addition to the exciting lacrosse action, the IWLCA Presidents Cup provides enormous tourism benefits.  This event will generate over 15,000 hotel room nights and more than $10.5 million in economic impact for Palm Beach County. The event which will significantly impact hotel occupancy levels, bed tax revenues, and visitor spending during the month of November.

“The Palm Beach County Sports Commission is humbled, honored, and excited that the IWLCA will bring its Annual Meeting and Presidents Cup to The Palm Beaches”, says George Linley, Executive Director of the Palm Beach County Sports Commission.  “The abundance of new dollars and rise in hotel occupancy will be welcomed by the hospitality and business community.  Hotels from Jupiter to Boca Raton will experience a surge of business during the fall. There are very few opportunities to host a single sporting event that will create a positive economic explosion countywide.” 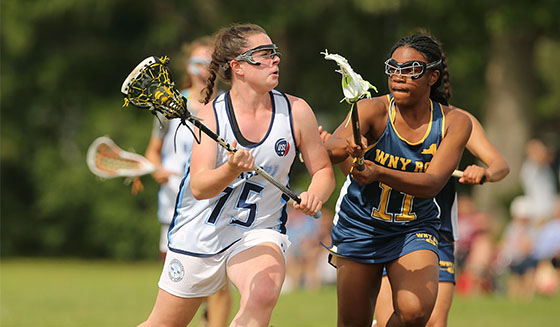 The Honda Classic received exciting news when Brooks Koepka, a West Palm Beach product and reigning PGA TOUR Player of the Year committed to compete in the tournamnet. Koepka, who is 28 and the No. 2 player in the Official World Golf Ranking after a short time at No. 1, has been consistently dominant on the international stage for two years now, conquering a wrist problem early last year that temporarily slowed his momentum.

The impact of Tiger Woods return and the increased presence of the world’s best golfers was apparent last year.  In 2018, 224,642 spectators attended the tournament, a 10% increase from the previous year. The modern day attendance record greatly surpasses the number of spectators (83,500) who attended The Honda Classic in 2007 when it moved to PGA National Resort and Spa

The Honda Classic makes a major impact regionally, nationally, and internationally. The tournament provides PGA Tour excitement to incoming visitors and Palm Beach County residents alike. This provides a major boost to the local economy.  Last year, fans, media, sponsors, and the players generated over 10,000 hotel room nights in addition to more than $40 million of economic impact. Palm Beach County is showcased world-wide as The Honda Classic is televised live on the Golf Channel and NBC and is internationally distributed to 250 countries, with a potential reach that exceeds 800 million households.

Make sure you visit The Honda Classic, one of the greatest spectacles in sports for Palm Beach County. In addition to the best PGA TOUR stars competing, The Honda Classic features a week-long schedule of events and activities, including a Pro-Am tournament, golf clinics, practice rounds, children’s activities and an “after play” concert series.  For additional event information, ticket packages and commitment list of PGA TOUR professionals, please visit www.thehondaclassic.com. 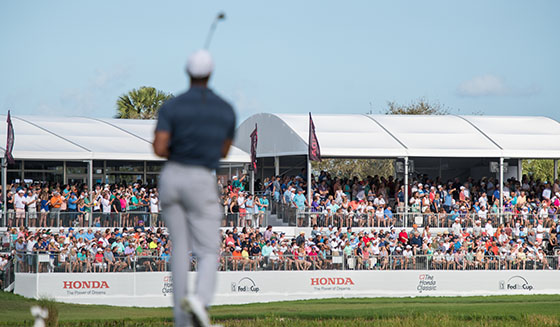 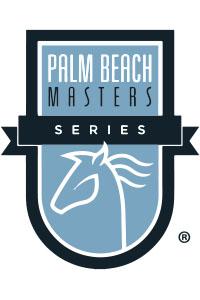 The expanded 2019 Palm Beach Masters Series at Deeridge Farms combines the world’s top equestrian athletes with an incomparable social scene. The Series will host the top professional, junior, and amateur riders from across the globe, as they compete for more than $1 million in prize money. Now in its fourth year, the lineup features three prestigious events, which will showcase world-class equestrian competition between January and March.
CSI4*-W Longines FEI Jumping World Cup™ Wellington
• January 30th - February 3rd
CSIO5* Longines FEI Jumping Nations Cup™ of the United States
• February 14th - 17th, 2019
Deeridge Derby
• February 28th - March 3rd, 2019
The Longines FEI Jumping World Cup™ Wellington is part of the Longines FEI Jumping World Cup™ North American League and serves as the penultimate east coast qualifier of the 2018-2019 season. Exhibitors at the highest levels of the sport of show jumping will compete for qualifying points toward the Longines FEI Jumping World Cup™ Final, which will take place in Gothenburg, Sweden, in April.
The Palm Beach Masters Series will also host the only qualifier on U.S. soil for the 2019 Longines FEI Jumping Nations Cup™ Final. A celebration of team competition, the FEI Nations Cup is one of equestrian sport’s oldest traditions; Deeridge Farms’ Nations Cup week will not only host the Senior Nations Cup event, but also Young Rider, Junior, and Children’s Nations Cup competitions, respectively. The event will bring together the sport’s current and future stars in a unique team format that pits nations against each other, similarly to what is seen in the Olympic Games.
New in 2019, the grounds will feature a boardwalk lining the sand ring, which will feature a restaurant open to the public as well as boutique shopping. A memorable, one-of-a-kind experience is promised for every guest. For more information and full schedule visit  https://palmbeachmasters.com/ 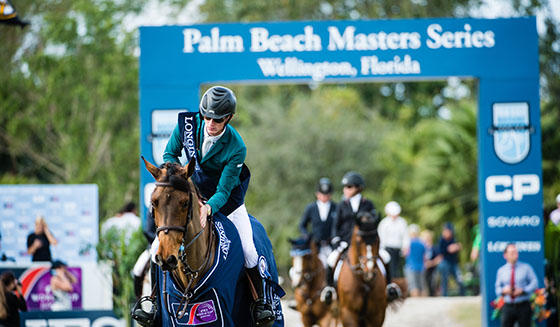 The 2019 Delray Beach Open presented by VITACOST.com is set to rock Delray Beach’s downtown tennis stadium this February with the game’s best ATP players going up against the youngest rising stars on tour.

Now joining an already star-filled line-up, 2009 US Open Champion and 2011 Delray Beach Champion Juan Martin del Potro will be making his fifth appearance in the Village by the Sea, starting his season for the third consecutive year in Delray Beach. Del Potro will play his opening match Tuesday, February 19th, at 8:00 p.m. following 2018 Singles Champion Frances Tiafoe who is scheduled to play at 6 p.m. in a blockbuster night of play.

New this year, opening weekend will see the inaugural First Serve Tennis Ball and ATP Pro Am. The “Tennis Ball” on Saturday evening February 16, will feature a lavish dinner and open bar with live entertainment starting at 6:00 p.m. followed by box seats at the Team World vs. Team Americas ATP Champions Tour matches.  On Sunday, February 17, the Pro Am tournament will swing underway at 9:30 a.m. with 12 teams comprised of an amateur and an ATP professional player competing against each other. The top two teams from the morning session will play against each other in the Pro-Am championship match on the main stadium Court between the day’s two scheduled ATP Champions Tour matches. The championship match will include a chair umpire, ball kids, Hawkeye Live electronic line-calling and all match amenities afforded ATP pros, as well as a raucous crowd. For “Tennis Ball” tickets or to participate in the ATP Pro Am, contact Sonny Maken at First Serve directly at Sonny@firstserveusa.org or at 561-767-0220. 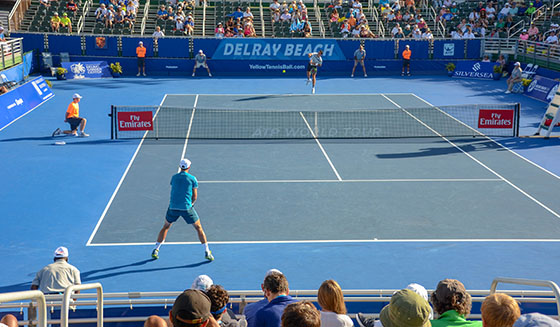 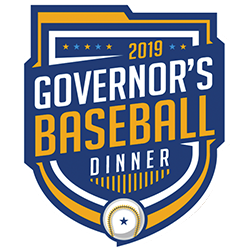 The Governor’s Baseball Dinner, a celebration of a new season of Major League Baseball Spring Training in Florida, makes its second stop in Palm Beach County in the last five years when the Kravis Center for the Performing Arts, in West Palm Beach, hosts the event on Sunday, February 17.

The highest point in Palm Beach County, the downtown site of the Raymond F. Kravis Center for the Performing Arts has long been a spot where people have gathered for entertainment. For more than 60 years, the Kravis Center property was home to Connie Mack Filed (formerly Wright Field), a baseball facility named after Mack, a Hall of Famer and baseball manager for over 50 years. Spring training camp for the Philadelphia Athletics and the St. Louis Browns, Connie Mack Field saw action from some of the greatest names in baseball: Babe Ruth, Lou Gehrig, Jackie Robinson, Joe DiMaggio and Mickey Mantle among them. Today, a commemorative plaque on the grounds of the Kravis Center marks the spot of home plate of Connie Mack Field.

“This will be an exciting evening showcasing one of America's greatest pastimes,” said Florida Sports Foundation President & CEO, Angela Suggs.  “Now with two stadiums and four teams in Palm Beach County, the area has become a prime spring training destination.  We are honored to continue this historic event once again in West Palm Beach.”

The 2019 Governor’s Baseball Dinner begins at 7:00 p.m. as dinner will be preceded by a VIP Reception and meet and greet.  MLB Commissioner Rob Manfred is scheduled to attend along with representatives from many of the 15 teams who annually train in Florida, along with a number of baseball greats.

Tables for the event, which seat 10, are priced at $1,200 and includes admission to pre-dinner reception. A limited number of VIP tables of 10 are available at $2,000 and includes access to a VIP Baseball Legends Reception.  Individual seats are $135. Baseball fans in attendance will also have the opportunity to bid on silent auction items from Florida’s Spring Training teams.

Table and seat purchases can be made online at www.palmbeachsports.com. For more information, call the Palm Beach County Sports Commission at (561) 233-3096 or the Florida Sports Foundation at (850) 298-6638.

A 2018 Economic Impact Survey showed the Florida Grapefruit League brings $687.1 million annually to the state’s 12 locations during the months of February and March and attracts 1.5 million fans a year.

Roger Dean Chevrolet Stadium, in Jupiter opened in 1998, and has hosts the St. Louis Cardinals, and Miami Marlins at that location.  FITTEAM Ballpark of the Palm Beaches opened in 2017 and has been the spring training home of the Houston Astros and Washington Nationals the last two seasons.

The Florida Sports Foundation, a Division of Enterprise Florida, Inc., and the state’s lead sports promotion and development organization, has partnered with the Palm Beach County Sports Commission to stage this year’s celebration. 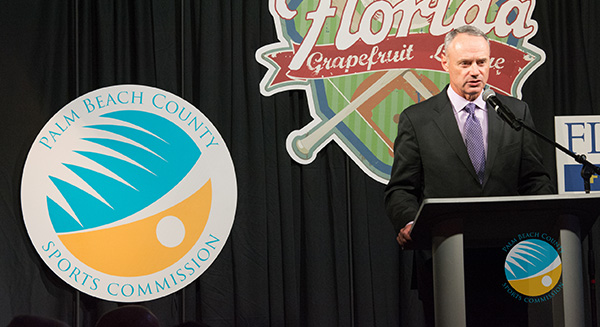 The Governor's Baseball Dinner will take place in The Palm Beaches for the second time in the past five (5) years. See highlights from the last time Palm Beach County hosted this grand baseball celebration