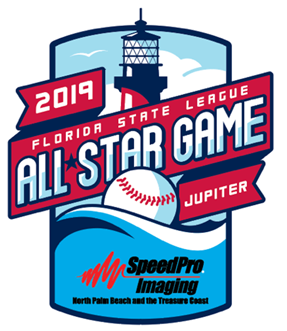 The Florida State League has undergone tremendous changes since the last time the all-star game was in Jupiter. Since the millennium, there have been multiple organizations that have joined the historic league with the Reds, Braves, Cardinals and the Pirates all bringing their Advanced-A affiliates to the Florida State League.

The annual spectacle puts all of tomorrow's Major League Baseball (MLB) stars in the same stadium for one night. There have been many Major League All-Stars that participated in an all-star game during their stint in the Florida State League. Players such as Gary Sanchez, Noah Syndergaard, Marcell Ozuna and many others have all donned a Florida State League All-Star uniform at one point in their career. 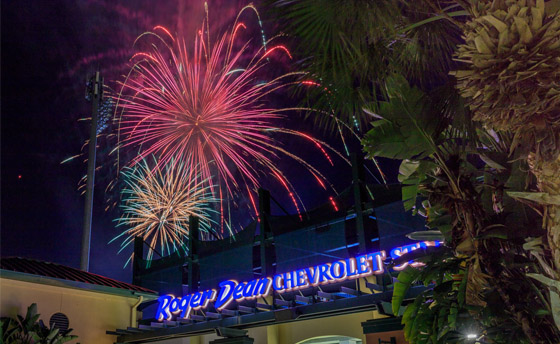 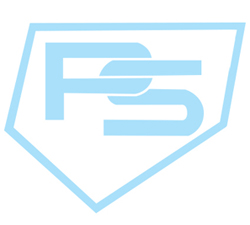 The Palm Beach Classic attracts elite travel teams from across the United States, Canada, Puerto Rico, Venezuela, Dominican Republic, and the Bahamas. These teams compete in a wood bat only format, featuring three age groups (14U, 16U, & 18U).

Located in West Palm Beach, FITTEAM Ballpark of the Palm Beaches is Florida’s newest Major League Baseball (MLB) spring training facility and is home to the Houston Astros and Washington Nationals. The facility opened in 2017 and features a 7,500-seat stadium in addition to 12 supplementary diamonds built to MLB specifications. Prospect Select Baseball also brought its prestigious TOPPS Showcase to Palm Beach County.  The TOPPS Showcase took place in conjunction with the Palm Beach Classic and featured 80 of the most talented high school baseball players in the country.  These players compete in a variety of skills competitions before playing in the TOPPS Showcase game. 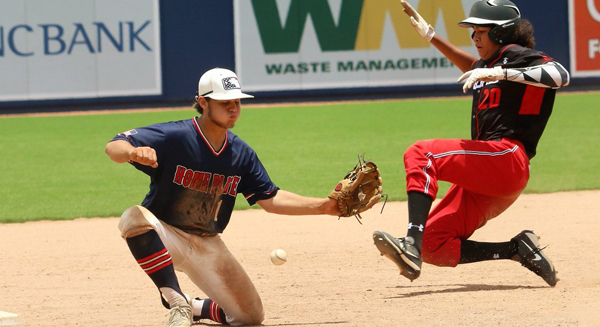 The Santaluces Athletic Complex, located in Lantana, was the former spring training facility for the Montreal Expos. The complex is owned and operated by Palm Beach County Parks and Recreation and maintains four lighted baseball diamonds of professional dimensions. 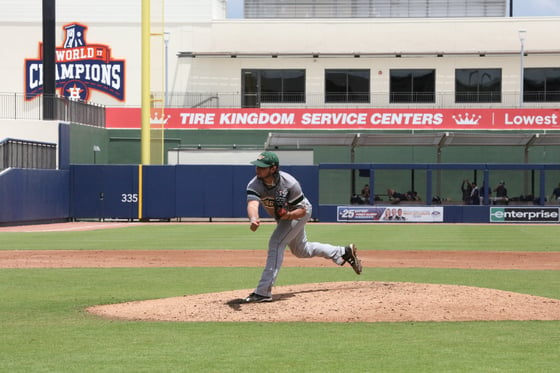 “For many years, Palm Beach County has been a premier destination for baseball events and we’re excited about the opportunity to partner with our Sports Commission, Roger Dean Chevrolet Stadium and FITTEAM Ballpark of the Palm Beaches to facilitate Prospect Select and its Palm Beach Classic,” remarked Eric Call, Director of Palm Beach County Parks and Recreation.  “We’re pleased to be able to present our award-winning park system and sports venues to visitors and I know that all of the participants will enjoy their experience.”

The Palm Beach Classic will be one of the largest amateur sporting events taking place in Palm Beach County during the summer of 2019.  In addition to home runs and great catches, this event will bring tremendous economic benefits.  The influx of visitors will create an estimated $4 million in visitor spending while generating a strong boost to hotel occupancy levels.

"We are extremely excited about the 2019 Palm Beach Classic. The nation’s best travel organizations in amateur baseball and the nation’s premier baseball players will be on display at world class venues in The Palm Beaches,” said Prospect Select Baseball Regional Director, Jeremy Plexico.

Catch Some Fun at The Ballpark

Palm Beach County will be home to one of the most admired amateur baseball events in the United States. In partnership with the Palm Beach County Sports Commission, USA Baseball will host its National Team Championships at Roger Dean Chevrolet Stadium, the Spring Training home of the Cardinals and Marlins and FITTEAM Ballpark of the Palm Beaches, the Spring Training home of the Houston Astros and the Washington Nationals from June 14-30, 2019.  Nearly 100 teams consisting of approximately 2,000 athletes will contend for championships in the 14U, 15U, and 16U age groups.  This event serves as the East National Team Championship, which takes place simultaneously with the USA Baseball’s West National Team Championship in Arizona.

The USA Baseball National Team Championships will be one the largest amateur baseball tournaments taking place in Palm Beach County this summer.  In addition to home runs, great catches and fastballs, the USA Baseball National Team Championships will bring a tremendous economic impact to Palm Beach County.  The two weeks of baseball games are expected to generate over 5,500 hotel room nights and $4 million in direct visitor spending.  Since 2001, USA Baseball hosted an event in The Palm Beaches.  A total of 77,424 hotel room nights have been tracked from these events. 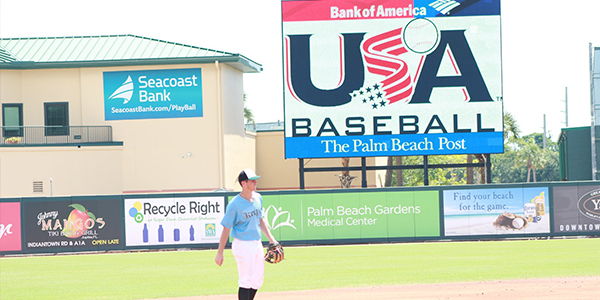 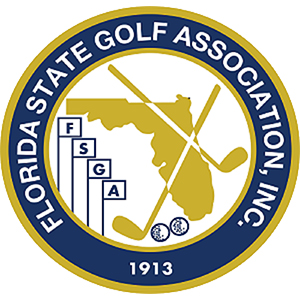 The Florida State Amateur Championship is one of the oldest and most prestigious amateur golf championships in the country. This year the Amateur will head to The Loxahatchee Club & Jonathan's Landing - The Fazio at Old Trail, in Jupiter, from June 20-23. The Fazio Course at Old Trail was just redone in the summer of 2018 and will be give players an exciting fresh look at a local favorite as the companion course.  The 102nd edition of the Amateur Championship will feature 168 golfers competing in 72 holes of individual gross stroke play.  All golfers play 18 holes at The Loxahatchee Club and 18 holes at Jonathan’s Landing Golf Club before the 36-hole cut. The final 36 holes will be played at The Loxahatchee Club. The courses will be sure to provide a test to the top amateurs in the state!

Golfers must qualify to compete at this prestigious event.  The FSGA stages fourteen (14) qualifying events that are gateways to competing at the Amateur Championship. 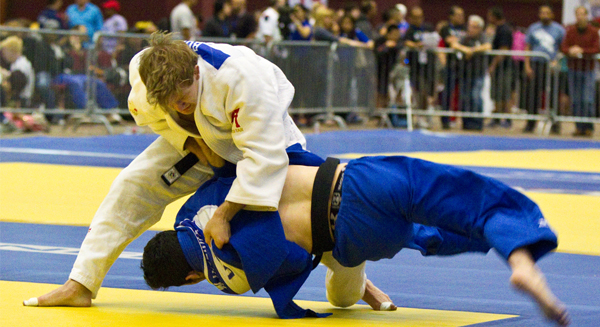 The Florida Sports Foundation, which is the official sports promotion and development organization for the State of Florida, presented the Palm Beach County Sports Commission with two (2) of its six (6) Florida Sports Tourism Awards at the annual Florida Sports Summit in Pensacola on May 21, 2019.

Finally, the Florida Sports Foundation recognized the Palm Beach County Sports Commission for organizing the Governor’s Baseball Dinner on February 17, 2019 at the Kravis Center.   Attendees from across Florida joined, Governor Ron DeSantis, including Palm Beach County Commissioners and elected officials, state legislatures, and representatives from teams that compete in the Grapefruit League. Major League Baseball Commissioner, Rob Manfred, also participated and promoted spring training baseball during this special event.  The dinner was a symbolic celebration of the mark that baseball has made in Palm Beach County and the state of Florida.  The Florida Sports Foundation marked the 2019 Governor’s Baseball Dinner as their best in the event’s illustrious history. 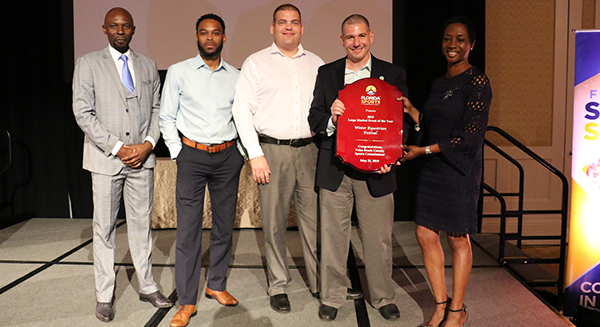