The Sunshine State Games is an Olympic-Style competition featuring a variety of sports.  The Palm Beach County Convention Center will be transformed into a sports palace by hosting the collection of indoor sports that makes up the Sunshine State Games, which includes: wrestling, taekwondo, judo, karate, weightlifting, powerlifting and fencing.  The participating athletes will travel from all parts of Florida to compete in a variety of skill levels and age groups (youth to adult).  Each sport features both men and women competitors.

No other venue among those on the 2015 Sunshine State Games calendar of events will host as many sports, with as many athletes as the Palm Beach County Convention Center. Nearly the entire building will be utilized to host this prestigious event.  Wrestling, taekwondo, judo, karate and weightlifting will take place in the exhibit hall (100,000 square feet).  Fencing and powerlifting will take place in the ballroom (25,000 square feet).

In addition to the seven sports taking place at the Palm Beach County Convention Center, the 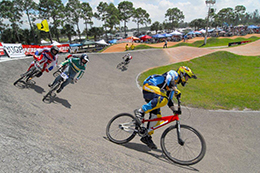 Sunshine State Games will also bring its BMX Festival to Palm Beach County. The BMX competition will take place at the Okeeheelee BMX Track.  Approximately 200 youth and adult BMX riders from across Florida will compete in a variety of skill divisions that range from novice to professional.

The Sunshine State Games and its visitors will create a significant tourism impact during Palm Beach County’s shoulder season.  The amateur athletes and their families will produce a high volume of hotel room nights and considerable economic impact for Palm Beach County’s economy.

“Through our partnership with the Palm Beach County Sports Commission, we have the opportunity to transform one of the County’s finest facilities into an outstanding venue for a multitude of sports,” said Stephen Rodriguez, Sr. Vice President of the Florida Sports Foundation.  “As always, the focus of the Sunshine State Games is to provide athletes with a first-class stage on which to perform.  For 2015-2016, that stage is the Palm Beach County Convention Center.” 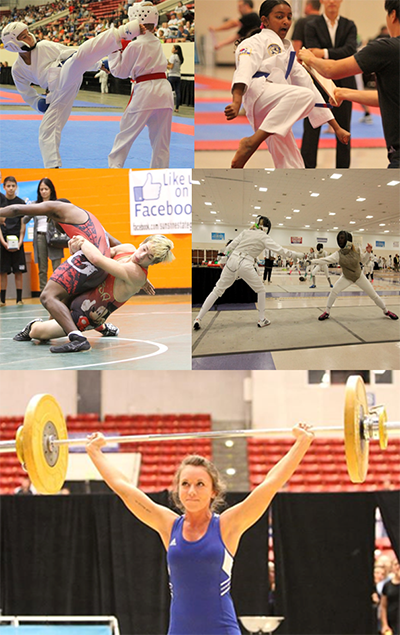 USSSA Boy's State Championships Expexted To Be A Slam Dunk

The Palm Beach County Sports Commission is partnering with the Jupiter Tequesta Athletic Association (JTAA) to bring the United States Specialty Sports Association (USSSA) Boys Basketball State Championships to Palm Beach County on June 12-14, 2015. The USSSA Boys Basketball State Championships is one of the largest youth basketball tournaments in Florida.  Over 100 teams are expected to compete in a variety of age divisions that range from 3rd grade to 8th grade.

Over 15 different venues, primarily located in North County, will be used to accommodate this colossal statewide tournament.  Teams qualified from all parts of Florida to vie for a state championship. USSSA Florida conducts 120 qualifying tournaments from March to May with the season culminating at the state finals.

This event will represent Palm Beach County’s debut as a host to the USSSA Boys State Championships. Palm Beach County has been a long time host to the Jupiter Jam, which is an event produced by the JTAA and sanctioned by USSSA that takes place during the spring.  In 2015, this event featured over 100 boys and girls teams in a variety of age groups.  The Jupiter Jam is widely regarded as one of the most respected and well produced youth basketball tournaments that takes place in Florida. This reputation of the JTAA and its Jupiter Jam combined with the large number of USSSA teams that are registered in south Florida bodes well for Palm Beach County’s ability to attract a hefty number of traveling teams.

This tournament will create a significant impact for the local economy.  The athletes and their families will dine in local restaurants, shop at local retail outlets, visit local attractions, and stay in Palm Beach County hotels.

USA Track & Field is expected to bring Palm Beach County one of its largest track and field meets. Over 1,500 athletes from across Florida will compete in a variety of age groups that range from 8U to 18U. The meet features both boys and girls divisions.

A track & field meet is comprised of many events, and the average track and field athlete will compete in three events during middle school ages and four events during their high school years.  The USATF Region 16 Junior Olympic Championships will consist of running events, field events, and combined or multi-events. 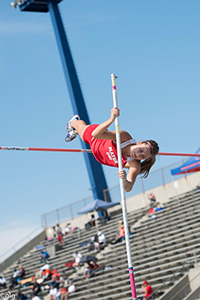 In 2015, the USATF Regional Junior Olympic Championships will encompass the Florida Association State Meet and is the only option to qualify for the National Championships.  These occurrences have created a high demand for participation.

USATF Region 16 Junior Olympic Championships will provide exhilaration on the track for the athletes and fans as well as off the track for the local economy.  The meet is expected to generate over 1,200 hotel room nights and more than $750,000 in visitor spending. 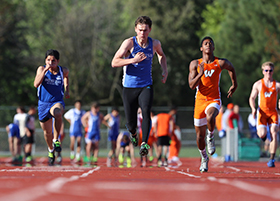 Track & Field is a foundational sport for athletes and continues to lead in sports participation within the United States. More high school athletes participate in track & field than any other sport (over 1.1 million) when combining boys and girls.  The state of Florida and Palm Beach County will be the focal point of the track and field universe this summer.

See below for a breakdown of events that will take place at the USATF Regional Junior Olympic Qualifier.

Combined or multi-events include: Decathlon, Heptathlon, Pentathlon, and the Triathlon.

Summer Football Clinic To Attract Players From Across The Nation

The South Florida Select Football Clinic will take place at the Oxbridge Academy in West Palm Beach on June 5-7, 2015.  This event will attract over 200 high school football players from across the nation.  The South Florida Select Football Clinic is unique because it brings coaches from the country’s top academic institutions to Palm Beach County to provide instruction and guidance on playing football at the collegiate level.  The clinic targets student athletes who are academically eligible to compete at a premier academic college or university.  Participating athletes will introduced to coaching techniques and coaches from the Ivy League and the New England Small College Athletic Association (NESCAC). The South Florida Select Football Clinic will adapt a rigorous schedule over 3 days -- Friday, June 5th, 12 p.m. to 9 p.m.; Saturday, June 6th, 11:30 a.m. to 5 p.m.; and Sunday, June 7th, 11:30 a.m. to 5 p.m.

The event will generate a tourism impact. Players from 15 different states have registered to participate. Over 250 room nights are expected from the visiting athletes and coaches. 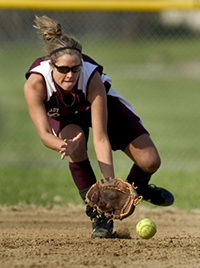 Palm Beach County will be home to one of the largest statewide Girls’ Fastpitch Softball tournaments taking place in Florida this Fourth of July weekend.  Softball will create excitement on diamonds across the County and off the field for the local economy.  More than 140 teams and over 1,700 athletes will play softball during the United States Specialty Sports Association (USSSA) Florida Girls’ Fastpitch Softball Championships, which will take place on July 3-5 at multiple venues located countywide.

Considered to be one of the most prestigious and coveted softball tournaments in Florida, the USSSA Florida Girls’ Fastpitch Softball Championships will bring all three skill divisions (A,B,& C) to Palm Beach County, resulting in the incredibly high number of participating teams.  In order to accommodate this unprecedented tournament, the Palm Beach County Sports Commission partnered with Palm Beach County Parks and Recreation to secure seven different facilities offering a total of 26 diamonds.  These 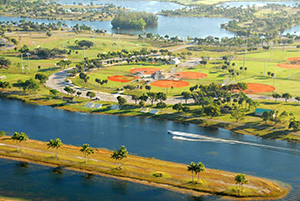 These prestigious softball championships and their massive collection of teams will create an enormous economic benefit for Palm Beach County.  The event is expected to generate over $1.5 million of economic impact and nearly 2,000 hotel room nights.  Hotels, restaurants, retail outlets, and attractions countywide will be filled with the ladies of softball and their families.

Founded in 1968, USSSA has grown to over 3.7 million participants, competing in 13 different sports across the United States and Puerto Rico. USSSA is a prominent organization for the sport of softball in Florida.  USSSA has 900 registered teams in Florida, the most of any softball organization

The Palm Beach County Sports Commission has developed strong relationships within the softball community and has supported a robust portfolio of softball tournaments.  Softball continues to experience one of the fastest growing participation levels for sports in the United States and is a major contributor to the sports tourism industry that flourishes in Palm Beach County.