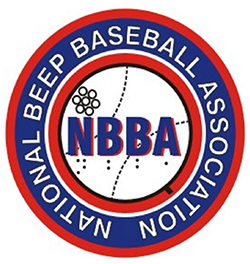 The NBBA World Series of Beep Baseball will make its debut in the Palm Beaches on July 23-30, 2017.  The games will be played at Village Park in Wellington and brand new Hilton West Palm Beach, which is connected to the Palm Beach County Convention Center, will serve as the host hotel and site of the awards banquet.  Over 30 teams from across the United State, Canada, and Taiwan will travel to the Palm Beaches in pursuit of a world championship.   More than 500 beep baseball players will compete.

During the NBBA World Series of Beep Baseball, teams first compete in grouped round robin play to determine seeding. The tournament then continues as a double elimination tournament to determine the champion. Under this format, teams are guaranteed a minimum of five games, with most teams playing an average of eight.

Beep Baseball originated in 1964, when Charlie Fairbanks, an engineer with a telephone company, implanted a beeping device in a softball as a way of encouraging blind athletes to become involved in recreational activities. Eleven years later, Beep Baseball enthusiasts formed the National Beep Baseball Association (NBBA) in Chicago. Ever since, the league has played a full schedule of games that begins in the spring and ends in late July or early August.

The NBBA World Series of Beep Baseball will provide a considerable tourism boost to the local community.   In addition to the athletes, the event will attract over 1,000 total visitors and will generate an estimated 1,500 hotel room nights and over $400,000 in direct visitor spending.

“Beep Baseball empowers individuals to learn about being part of a team, how to build a team, becoming physically fit, increasing self-confidence and competing against others across the United States, Canada, and Taiwan annually, for the honor of being champion," says Dan Greene, President of the NBBA. 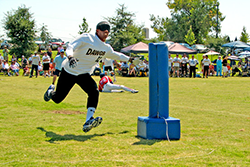 The Palm Beaches are a leading destination in Florida when it comes to baseball.  In addition to hosting Major League Baseball Spring Training for the Miami Marlins and the St. Louis Cardinals, Palm Beach County is home to some of the largest and most admired baseball tournaments and showcases in the nation.   The NBBA World Series of Beep Baseball will bolster the impressive baseball resume owned by the Palm Beaches.

Beep Baseball has many distinctions from the traditional format of baseball.  Below is a quick summary of these differences.

Craddock won the 2014 Groza award on an incredible year in which he stayed perfect until his final attempt of the regular season, finishing with the Maryland school records for accuracy (94.7%), longest field goal (57 yards) and most consecutive made field goals (24). But if he is to join former Florida State kicker Sebastian Janikowski, who won the award in 1998 and 1999, as the only two-time Groza winners, he’ll have to hold off an impressive batch of returning kickers, including both of his fellow finalists last season.

Joining Craddock on the Watch List are Florida State junior Roberto Aguayo and West Virginia junior Josh Lambert, both finalists for the Groza in 2014. Aguayo, who won the award as a freshman in 2013, leads the nation in field goals over the past two seasons, while Lambert last year became just the third kicker in FBS history to make 30 field goals in a single campaign. 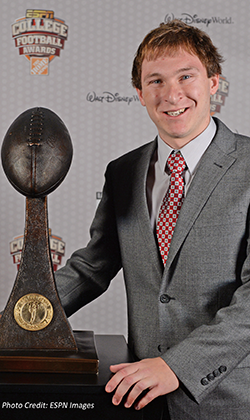 named semifinalists last season, as well as by 15 new faces. Only five returning FBS kickers attempted at least 10 kicks and made at least 90% of them, and all are on the Watch List: Craddock (94.7), Kansas State sophomore Matthew McCrane (94.7), Oregon sophomore Aidan Schneider (91.7), two-time semifinalist Duke senior Ross Martin (90.5) and Aguayo (90.0).

Kickers on the Lou Groza Award Watch List were chosen based on statistics from the 2014 season and 2015 expectations. All ten FBS conferences are represented among the 30 kickers, led by the ACC with six, the Pac-12 with five, and the Big 12 with four. The Big Ten, MAC and SEC each placed three kickers, followed by a pair each from the American and Conference USA. The Mountain West and the Sun Belt each placed one kicker.

While the Watch List highlights thirty of the best returning kickers in the country, all FBS kickers are eligible for this year’s award. In fact, two of the past three winners were not on that year’s Watch List. The Groza Committee will be watching all FBS kickers during the season, and releasing a weekly “Stars of the Week” feature on www.lougrozaaward.com.

The 24th Annual Lou Groza Collegiate Place-Kicker Award, presented by the Orange Bowl Committee, recognizes the three finalists during an early week celebration in Palm Beach County, culminating with a gala awards banquet at the Palm Beach County Convention Center on December 7th, 2015, prior to joining ESPN in Atlanta.

The Award is named for National Football League Hall of Fame kicker Lou “The Toe” Groza, who played 21 seasons with the Cleveland Browns. Groza won four NFL championships with Cleveland and was named NFL Player of the Year in 1954. Although an All-Pro offensive lineman as well, Groza ushered in the notion that there should be a place on an NFL roster for a kicker. 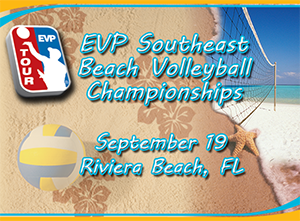 EVP Tour events are family style beach volleyball tournaments with divisions for youth, juniors and adults. The event is free and open to the public. Spectators and athletes will be treated with great competition and many activities, including bump to the buckets and serving contests. The EVP Tour’s primary goal is to support beach volleyball events that result in increases in sponsorships, participants, and spectators.

This event will represent the 5th consecutive year that the EVP Tour and Palm Beach County Sports Commission joined together to bring exciting beach volleyball to the Palm Beaches.  In addition to great entertainment, this event will also provide an economic boost during the traditionally soft month of September.   Don’t miss the action!  For more information, visit evptour.com.

College football returns to the Palm Beaches for the 5th consecutive year, when Florida Atlantic University (FAU) kicks off its 2015 football season against the University of Miami.  This historic game will not only be the home opener for FAU, but will represent the first appearance by the Hurricanes in FAU Stadium.  The game is a sellout and is expected to be FAU Stadium’s largest audience, since the venue opened in October of 2011.

This year will also represent FAU’s inaugural season as a member of Conference USA.  Conference USA announced its 14-team alignment for the 2013 football season, which will feature seven teams in both the East and West Divisions, with each team playing eight conference games, along with four non-league contests. Each university will play each team in its division once, while playing two cross-over opponents from the opposite division.

FAU will join East Carolina University, Florida International University, Marshall University, Middle Tennessee State University, Southern Mississippi and Alabama-Birmingham in the East Division, while Louisiana Tech, University of North Texas, Rice University, Tulane University, University of Tulsa, Texas El Paso University and University of Texas – San Antonio make up the West Division. Conference USA Commissioner, Britton Banowsky said, “Florida Atlantic University is a rising star, a dynamic and growing university in a wonderful place. They are a great fit and we are so pleased to have them on board next season.”  Pat Chun, FAU Director of Athletics, remarked, “This is a bold and decisive step for our entire athletic program. Conference USA will bring forth new challenges, opportunities and expectations. The platform offered by mirror the upward trajectory of our great institution. We will continue to build our athletic program to represent Florida Atlantic University on the highest of levels.”

FAU will play its first game at the University Miami, which represents the first ever matchup between the Owls and the Hurricanes.  The first home game at FAU Stadium in Boca Raton takes place on September 21, when the Owls host Middle Tennessee.   FAU Stadium will host 5 games in 2013, including the Owl’s season finale against Florida International University on November 30th.

Conference USA's national television partners are Fox Sports Media Group and CBS Sports Network for regular season games. The league's ninth annual Championship Game, pitting the champions of the East and West Divisions, is scheduled for Saturday, Dec. 7 and will be televised by ESPN or ESPN 2. 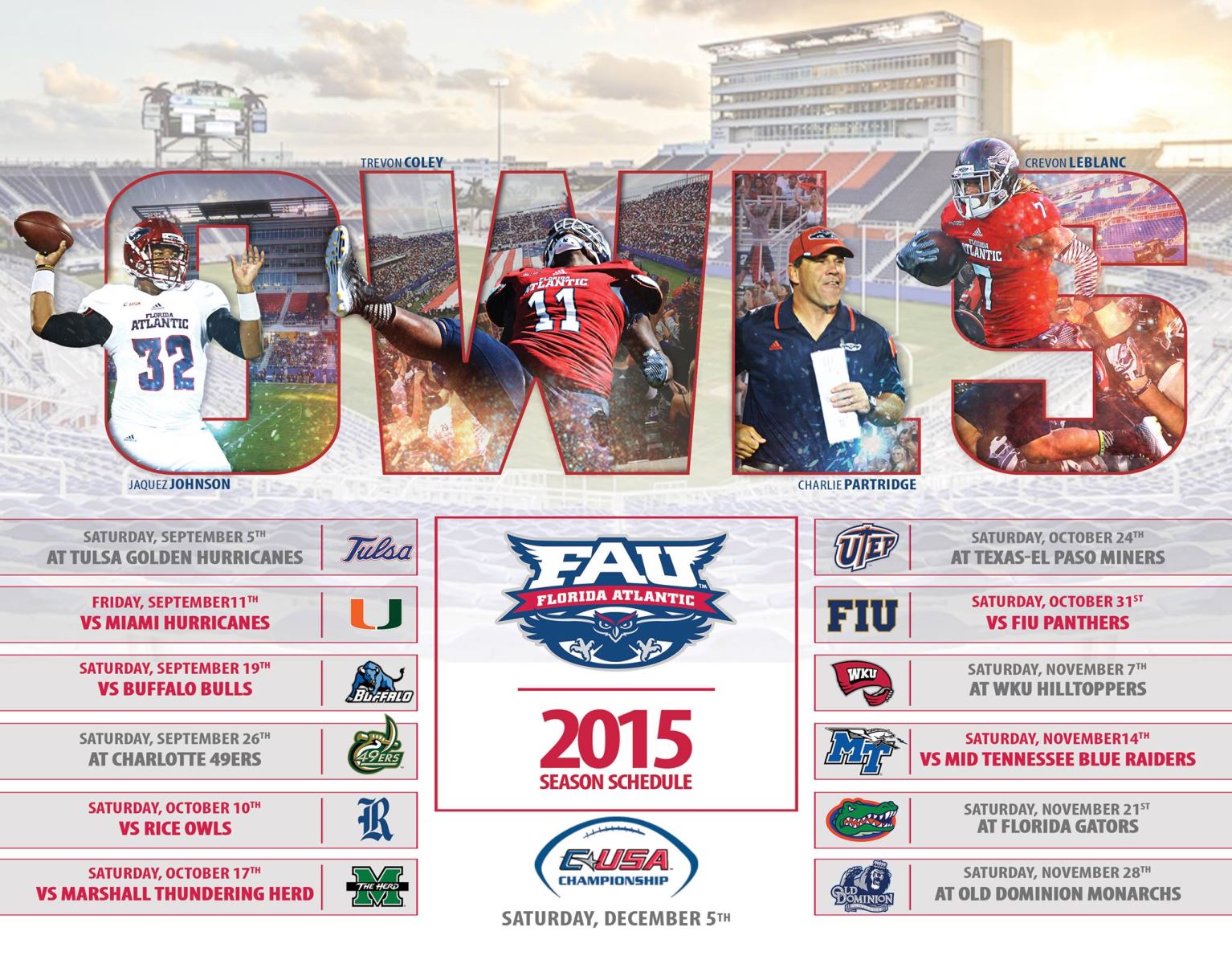